Gaisheda Kheawok is known as The Messenger of The Mother, she interprets Astrology from the perspective of Indigenous Astrology—and here in this article, with an understanding of Celtic Wisdom, because “the time of the one is now”. Now is the time for us, for a new paradigm of perspective.—Susan

“We are One.  In the Tribal Traditions, we have entered into the 5th  dimension, the time of the Prophecy as shared by Grandmother Twylah Nitsch in her esteemed book, Other Council Fires Were Here Before Us. This is a time that presents the opportunity to move into the understandings and consciousness of the One at a Soul level. “—Gaisheda Kheawok

The Tribal Teachings recognize that we are One with all aspects of the Creation Story.  Individual psychological growth cannot be separated from that of the collective, nor from the consciousness of the Earth, her Elemental Teachers and the rhythms of the solar/lunar calendars.  Indigenous people have long recognized the rhythm of the natural world in concert with the lunar and solar cycles, and have held that conscious understanding of the alchemical archetypes of the Sun, Moon and Earth allow us to move to new paradigms of perception.

The Celtic and Tribal people celebrated the dance of these Energies through the sacred landscape and aligned their understanding of the natural world via the Lunar, Solar calendars.  These cycles can be found embodied within celestial alignments at sacred sites around the world.  They teach us of the universal dance between the Divine Feminine/Sacred Masculine archetypes, known as The Original Intention.  Our journey as the two-legged is intimately interwoven with the Earth, the celestial rhythms, and the Teachings of the Elementals. 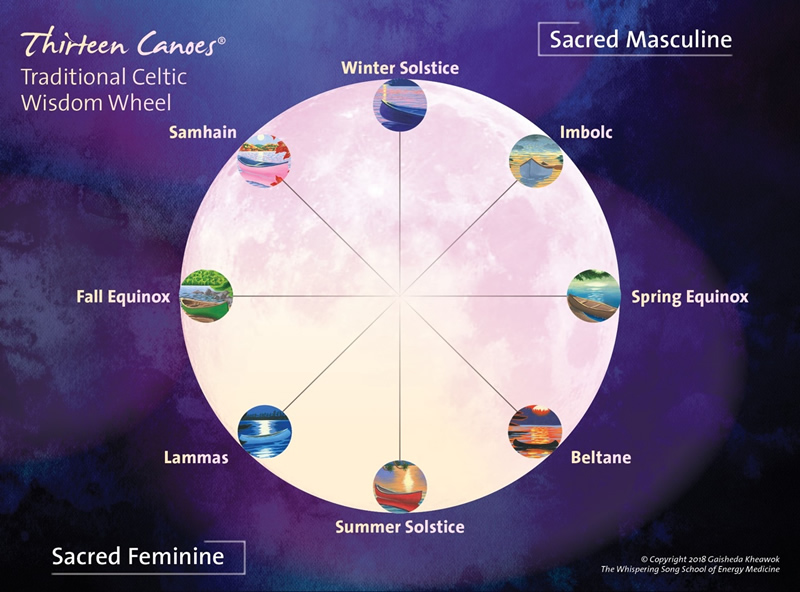 The Celtic Calendar solar alignments and the Seneca Thirteen Moon Wisdom Wheel (Whispering Song School of Energy Medicine and Gaisheda Kheawok, 2017) provide a tangible framework to decode the energetic influences on the Earth and her Earth Tribe.  Indigenous Astrology teaches that the solar alignments represented by the eight seasonal festivals of the Celtic Calendar Wisdom Wheel  establish an energetic map of our collective direction.  In ancient tribal wisdom teachings, the time of the alignment and the length of the energetic gate of the Celtic Calendar is in direct relationship to the sun’s position in relation to the moon cycles.  The Celtic Calendar is a portal that signifies the celestial alignment of the Moon and the Sun in relationship to the Earth.

This energetic dance is represented by the Triskelion, a sacred symbol found within the Newgrange Sacred Site Complex in Ireland, which is illuminated by the rising sun once a year at the Winter Solstice, marking the celestial and terrestrial shift into the Sacred Masculine cycle of the Celtic Calendar. 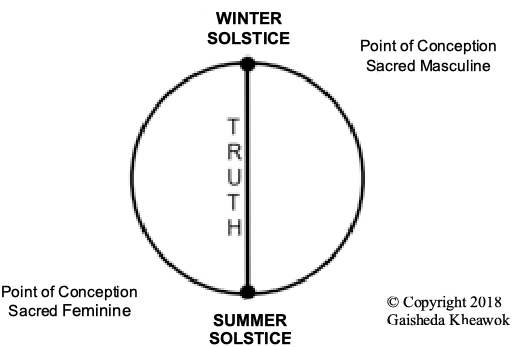 This energetic portal on the Celtic Calendar is known as the Point of Conception. 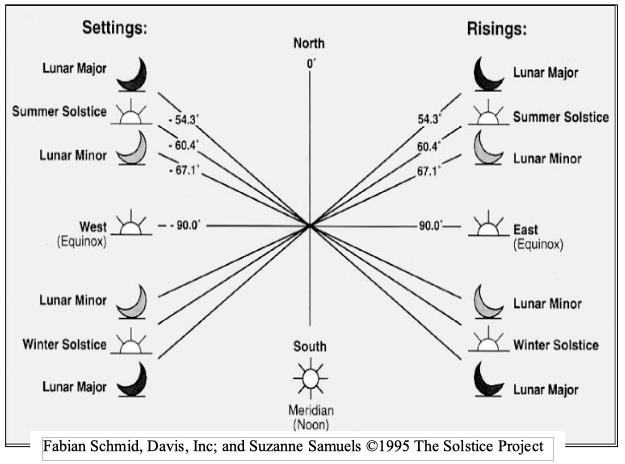 The alignment to Venus at Newgrange is the midway point for the Lunar Standstill.  As discussed by interpretive astronomer and researcher Ron Sutcliffe in Moon Tracks: Lunar Horizons Patterns (2006), the Lunar Standstills occur approximately every 18.6 years when the Moon reaches its Northernmost position in the sky at the Summer Solstice alignment, and its Southernmost position at the Winter Solstice alignment.  Venus is visible from the Newgrange chamber when it rises once every eight years in the Venus cycle (Campbell, 1958).  Within the sacred landscape, the Lunar Standstill takes place in Chimney Rock / Pagosa Springs, Colorado, and has occurred in Mesa Verde National Park, Colorado, the Isle of Lewis, Callanish, Scotland, and Chaco Canyon, New Mexico, which has been extensively detailed by archeoastronomy researcher and founder of the Solstice Project, Anna Sofaer in Chaco Astronomy: An Ancient American Cosmology (2008), and J. McKim Malville in A Guide to Prehistoric Astronomy in the Southwest (2008).  The Lunar Standstill is also connected to the Mayan Harmonic Convergence. These well-documented events substantiate the Lunar Standstills as a viable reality, as is evident through the alignments to the sacred landscape, and as discussed by Alexander Thom in The Two Major Megalithic Observatories in Scotland (1984), and Margaret Curtis’ Callanish-stones, Moon and Sacred Landscape: 2009 Extrapolation (2009).

We know that these sacred sites, correlating to the Lunar Standstills and the Celtic solar cycles, are living breathing astronomical calendars from a time when astronomy and science were the same, before being separated by modern empirical scholarship and dominant religious doctrine.  The Tribal people synchronized their lives to the timing of the Sacred Masculine and Sacred Feminine Cycles, to live in harmony and balance with the Original Intention.  As detailed by Celtic scholars Caitlin and John Matthews in their illuminating works, The Encyclopedia of Celtic Wisdom: A Celtic Shaman’s Sourcebook (2001), the cross-quarters of the Celtic Calendar are the most significant energetic portals, the wisdoms of which have been buried through the superimposition of Christian cultural festivals, i.e. Halloween at the Celtic Calendar Festival of Samhain.

We are One.  In the Tribal Traditions, we have entered into the 5th  dimension, the time of the Prophecy as shared by Grandmother Twylah Nitsch in her esteemed book, Other Council Fires Were Here Before Us. This is a time that presents the opportunity to move into the understandings and consciousness of the One at a Soul level.  The astronomical indigenous astrology and alignments are an alchemical process that can support us to bring our spiritual wisdom and the consciousness of the One into our day- to-day Earthwalk.  By charting the lunar and solar alignments in relationship to the 8 festivals of the Celtic Calendar, we deepen our awareness of the energetic portals and align ourselves to the universal rhythms of the Original Intention – accessing the vibrational frequency of celestial wisdom and infusing the sacred alchemy of the Earth Mysteries / Sacred Sites into our Earth Walk. 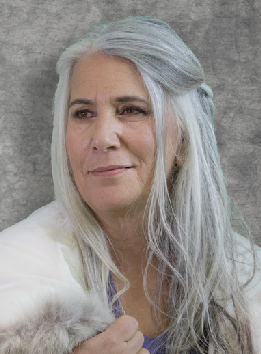 Gaisheda Kheawok is a Shamanic Priestess and Tribal Elder, Seer, Medicine Person and Indigenous Astrologer in the Celtic and Seneca traditions.  She is known as The Messenger of The Mother, and is a renowned psychotherapist, with 30 years of experience in Shamanic Archetypal Energy Medicine™   Gaisheda is the Founder/ Director of the Whispering Song School of Energy Medicine, an innovative School delivering holistic psychoeducational programs for individuals seeking personal growth, and practitioners interested in progressive professional development. As a celebrated international speaker, Gaisheda has facilitated over 3,000 workshops and Sacred Site pilgrimages worldwide.  Gaisheda is a member of the International Society for Astrological Research (ISAR), The Association for Comprehensive Energy Psychology, The Canandian Association for Integrative and Energy Therapies and The Seneca Wolf Clan Indian Historical Society. gaishedakheawok@gmail.com www.whisperingsong.ca

“Constellation News” is the magazine featuring the research of the speakers at the Institute for Vedic Culture (IVC) conferences in Kolkata India.

Constellation News is edited by Gopal Bhattacharjee and co-edited by Alex Trenoweth. Gopal Bhattacharjee founded the Institute of Vedic Culture in 1988 and in 1998, Gopal founded KIA. Since 1990, the school has hosted the IVC conference and in 2014, it welcomed its first Western astrologers as lecturers. Alex Trenoweth divides her time between the US, UK and India. In 2015, she won IVC’s “International Astrologer of the Year” and later became IVC’s International Secretary General and Vice Principal of KIA. Both she and Gopal work tirelessly to bring astrologers to India for friendship and scholarship.

More information:
Go to the website of the IVC and Constellation News